I've always had a thing for mechanical keyboards, but one of my good friends has been slowly bringing me down to his level of obsession.

Currently, I own a Corsair K70 (Cherry MX Blues) and a Noppoo Lolita Spyder 87 (Kailh Browns). At work, I was lucky enough to be lent a Happy Hacking Keyboard. I also have an order in for a KBD75 (Zealio 67gs).

So, I'm still at the very tip of the iceberg when it comes to this hobby. And what did I do? I ordered a 25-switch testing board, just so I can see how far down the rabbit hole I'm willing to go. 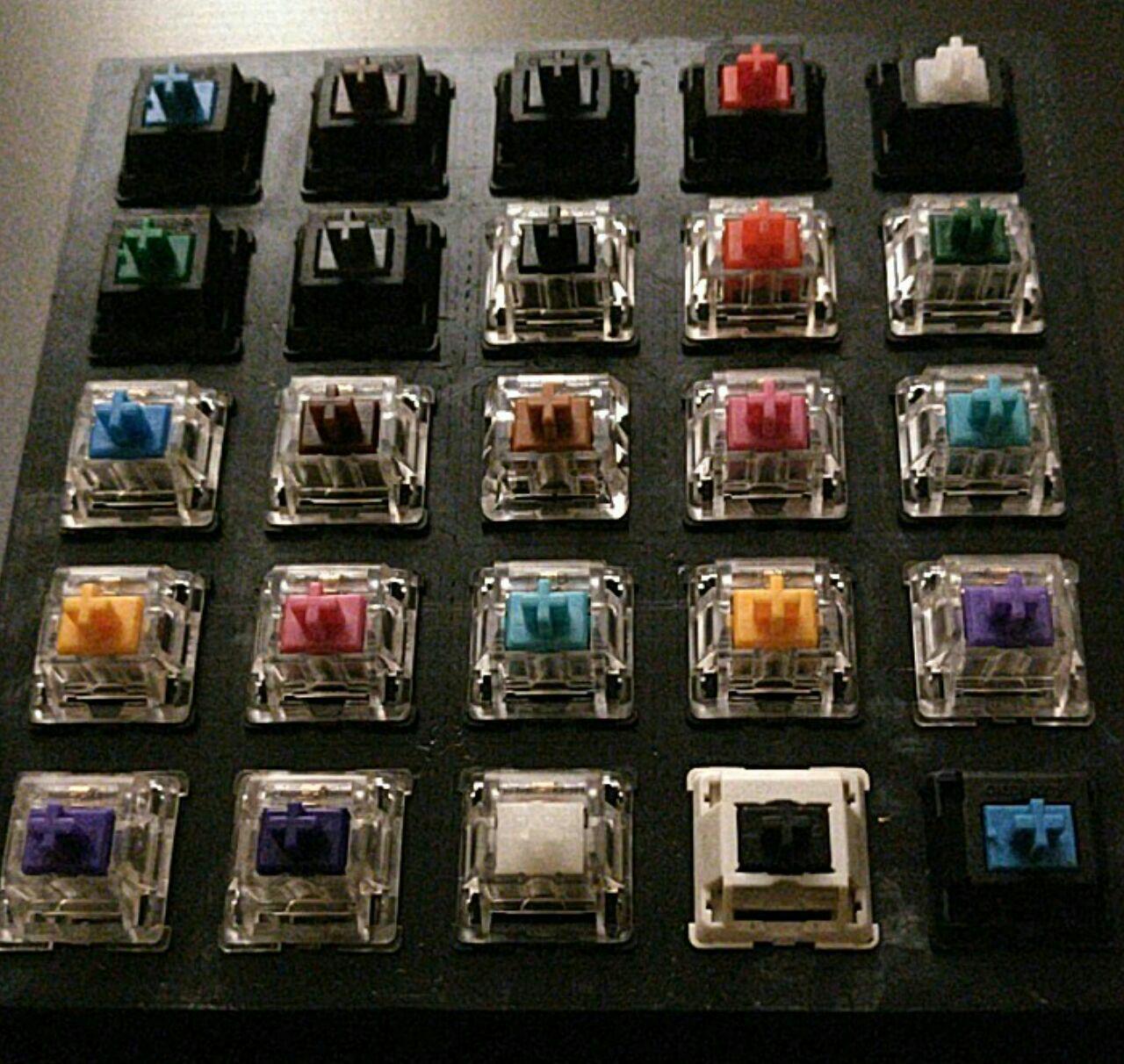 I've labeled the switches and their respective placement on the board:

The choice in switches resulted from a desire to have a good standard of comparison, rather than simply picking up a bunch of exotic switches... though I will admit some I just had to get for funsies.

Anyway, here are some of my thoughts on each. It's not really meant to be a potential buyers guide, nor an indepth review of each switch. Just how my dumb fingers felt while pressing them!

This is generally my go-to switch. You just can't go wrong with that super tactile, clicky goodness!

Browns are the blues for people who want to keep their job. You still feel a slight bump, but don't get that deafening clack.

I'm not really a fan of linear switches, but I do appreciate how blacks feel. The stiffness means that doesn't feel mushy like a red.

Honestly, do not enjoy reds at all. It feels too "empty" for me. The lack of stiffness and no feedback makes it very hard for my fingers to actually register that they're pressing a key.

Wow! These feel really good. Putting weight behind the brown makes a good switch great. I'd like to try a full typing setup with them though.

Okay, I've never tried a green before this and I'm really upset that I haven't. Of the Cherry MX switches I've tried, this is now my favorite. It's simply a better blue.

I heard this switch was interesting, but I really don't see it. It feels like a slightly mushier black.

Obviously similar to the Cherry MX Black. This feels smooth and it has some resistance. I actually kinda like it.

Yeah, I don't like this switch at ALL. The same problem as the red, but it somehow feels even less present.

Huh! A green with an even sharper bump. Even better! But by God is it loud.

I'm really digging the bump on these Gaterons. Nicer than Cherry MX blue, but I still prefer greens.

Huh, I thought I'd like this more than the Cherry MX browns, but I actually don't. It feels more "damp" to me, if that makes sense?

I got this because I was told it had a two-way tactile bump. It's really gimmicky and I don't enjoy pressing it. This is probably the loudest switch by far.

Similar to a brown, but the tactile bump feels "all at once." I really don't have a better way to describe it!

Identical to the light version, but slightly stiffer. Quite pleasant!

Same as the previous two, but even stiffer. Pretty much a clear.

As you might have guessed, I really don't enjoy it.

A little stiffer, a little better! I could see myself using these with only a few grumbles.

Muuuuuch better. Not my ideal, but it could do!

I'm a big fan of this distinct bump. If I had to pick between this and similar switches, I'd definitely lean towards this.

Wow, this is simply pleasant. It has just enough give to make it welcoming to a touch, but enough resistance to make you really feel that actuation.

Believe it or not, stiffer isn't necessarily better. But I'm not saying it's bad either-- I like this only a little less than the 65g.

You like clacks? This is it. It feels very good to actuate, with a very responsive feel and loud click.

Eh, wasn't really feeling this one. One of the better linear switches, but still a far cry from some of the other switches in this list.

Alright, so this took me completely by surprise. I honestly downright love everything about how this feels.

So after playing with a bunch of these switches and trying to describe how they feel and what I like about them, I kinda realized my vocabulary for switch critique was kinda limited; there were certain experiences with specific switches that I didn't have a word for. A good example of this is the tactile MODs, which had a very nice feeling after you hit the bump and actuate. This is something I want to work on a bit, because if it's hard to talk about how they feel, it's hard to communicate my opinions effectively.

As for which switches I liked the most, it came down to the stiffer tactile switches. My top five ended up being Gatistotle 80g Spring, Zealio 67g, Zealio 65g, Jailhouse Cherry Blue, and MOD-M Tactile. Notable mentions include MOD-H Linear, Gateron Green, and Cherry MX Clear. I don't see this as a final ranking in my mind either. I think the real test would be actually getting some of these on a full board to have the full experience; it's one thing to press a switch 100 times with your index finger, another to use it in your day to day and getting a feel for it.

As for where we go from here... one step at a time! My KBD75 ships by the end of the month and I absolutely cannot wait to get my hands on it. But until then, I think it'd be best to take a step back before I start soldering boards with all these cool switches on them.